Dedicated servers in Space Engineers allow players to connect to a third party host, rather than using a player-host, in a peer-to-peer set-up. They are game instances intended for long time multiplayer games. They don’t depend on any player and they run without render and visual/audio effects. This will result to a faster connection and a more fluent multiplayer performance with less lag.

On PC With Steam:

On PC Without Steam:

Basic setup as a foreground process:

Setup as a service: 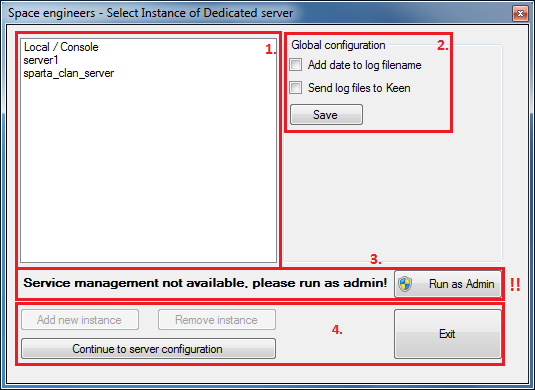 (Warning: Values out of the range allowed by the game user interface are not tested and officially unsupported. They can seriously affect the game experience and performance)

"Listen IP"
Address of network interface that the server will listen on. This can be set to “0.0.0.0” (which is the default value) to listen on all interfaces, which should work fine in most cases
"Server port"
Number of the port that the server will listen on
"Server name"
Name that will be shown in the server list
"World name"
Name of the server map/play area
"Server admins"
Steam IDs (not nicknames) of the players with administrator privileges on the server (such as kicking and banning other players), each of them on a separate line (64bit SteamID)
"Banned users"
Steam IDs (not nicknames) of the players who have been banned from the server (64bit SteamID).
"Mods"
Steam Workshop ID of any mods that the server will upload out to any connected clients.
"Steam Group ID"
If set to non-zero value, the dedicated server will only be visible for the given Steam group 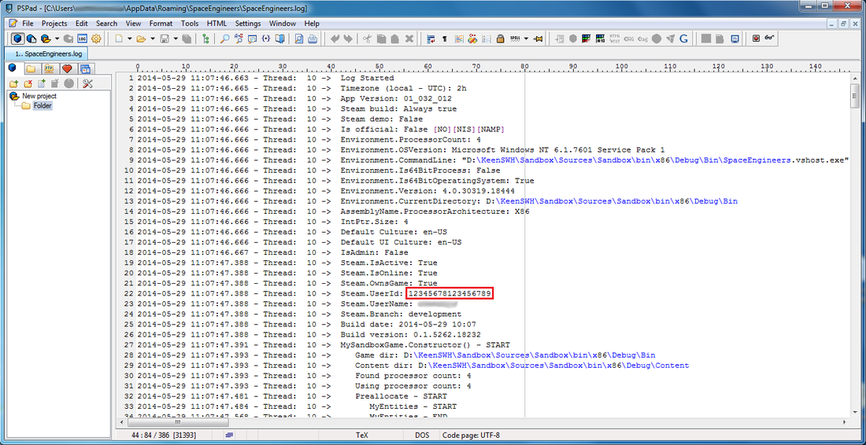 Servers can be restricted to Steam groups to better control access.

The group ID in the server configuration window references the GroupID64 not the Group ID on the profile page of your group. To properly fill out the group ID field you must obtain your group ID64. [1]

the following arguments can be used with SpaceEngineersDedicated.exe:

All info taken from the Official Page

The dedicated server in it's current version has a very basic problem. As far as it's known, KeenSW being an indie developer studio had just not had the financial resources to go right ahead and develop a multiplayer network code for Space Engineers from the scratch. So they took at least to develop a alpha version of the game that is presentable to the public some network code from Steam. And this network code works in at least one aspect in probable the worst possible way a network code could. The dedicated servers first priority is to calculate and exchange position data between clients. The clients then take the submitted positions and include them into their local world instance respectively the data that has to be taken into account for calculations. In it's current state the dedicated server gives out all position data to every client. It does not do what everyone would think is the obvious way to limit client side processing load, doing some sort of regional selection for every client and just give that client the position data he needs, like for example only give out position data of objects in the sight range of the client. And this behavior leads to the widely varying simulation speed between clients. The simulation speed depends on the processing power of the client. Older CPU's that would have an acceptable performance in solo play have now to calculate a massive amount of positions more than they should and the simulation speed breaks down massively for these clients.