These blocks are the icon of Space Engineers. They are the most basic building block in the game.

All armor blocks conducts control commands, electricity and has randomly generated texture, that connects to other blocks. On small ships it has an edge length of 0.5 meters (0.125 m³ volume); on large ships its edge length is 2.5 meters (15.625 m³ volume). Each block has a PCU cost of 1 (2 on Xbox).

A basic cube shape, airtight on all sides.

This is 1/6 of a default armor block and can be rotated to make more aesthetically pleasing ships or stations. They match up (as in, without seams) to slope armor blocks and inverted corner armor blocks, but not with standard armor blocks. This block is the most limited in terms of ability to weld to other blocks, as it can only be connected on three sides. Never airtight.

Half of an armor block, these blocks can double as steep, 45º angle ramps on stations or large ships. The blocks will match up (as in, without seams) to corner blocks and inverted corner blocks on its sides and match up to the default armor blocks its two square faces. This block can be welded to other blocks on four of its five sides. Airtight on its two backsides.

This is 5/6 of an armor block. These oddly shaped blocks allow for the completion of slanted ship designs, able to integrate with standard armor blocks on three sides, and slope or corner armor blocks from the other three sides. By using corners and inverted corners you can create bevelled corner "faces". Airtight on it's three square sides.

Corners, slopes and inverted corners made of 2 blocks to create an angle of 25.656° instead of 45°. This allows objects to look better but also fits to blocks of half height like the air vent or small ship rotor. 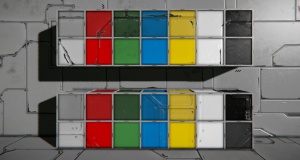 The default color patterns for blocks.

All blocks are able to be colored, and have a default color of Gray. The other presets, Red, Green, Blue, Yellow, White, and Black (in two different shades each), can be selected when placing a block using the "Prev. Color" and "Next Color" keys (defaults: '[', ']'). See Building#Color for more information about coloring blocks.

deformation and block integrity are factors in determining the relative strength and resistance to damage.

The lower the deformation ratio, the stronger the block is against impact damage such as collisions and weapons. [Citation Needed]

The light armor block is (as the name says) light, cheap and not very resistant. They are mostly used as a foundation for the ship/station, or for aesthetics, because connected faces at the same angle are seamless. For firepower protection, Heavy Armor is preferred.

As the name says, it's the heavier, sturdier and more expensive counterpart of Light Armor. Because of its mass, en masse usage is not recommended, as you will need to build more thrusters to maintain the acceleration power of the ship. For stations, the only downside remains its Steel Plate cost. To differentiate it from the light armor blocks, it has a camo pattern texture (see below).