The Automatic Rifle is a hand-held weapon used to defend one's self against other players, combat against hostile life (ex:Sabiroid), or mechanical devices such as Interior Turrets. Its exterior and magazine size are based on Heckler & Koch G36 Assault Rifle.

In Survival Mode, an Engineer must have some 5.56x45mm NATO Magazine ammo in their inventory to fire the Rifle, and will consume one magazine of ammo every 30 shots. Right-clicking while wielding the rifle will toggle use of the scope, which will narrow the player's FOV slightly and cause the player to hold the scope up to their eye. It does not currently require reloading, and whilst there appears to be little-to-no recoil when firing, it will push you back slightly if you fire while using the jetpack. This is most noticeable with the inertia dampeners turned off. In Creative Mode, the Automatic Rifle has infinite ammo.

There are now three upgraded versions of the Automatic Rifle. The Precise Rifle is more accurate, the Rapid-fire Rifle has a higher rate of fire, and the Elite Rifle is better in both respects. 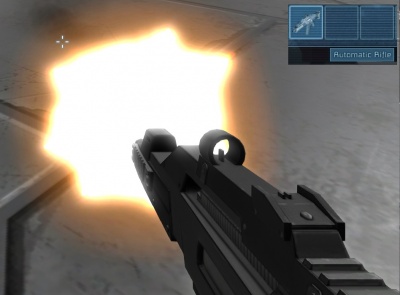