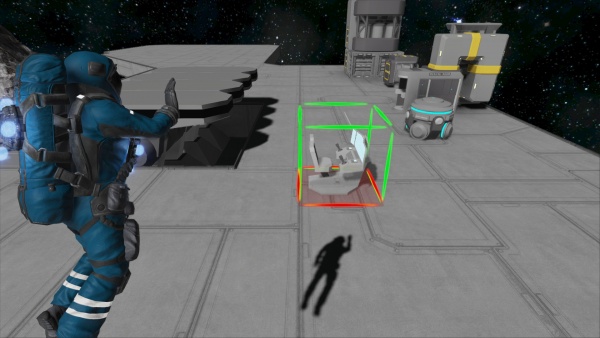 Creative Mode in Space Engineers is a free building mode that allows players have the ability to place an infinite number of blocks, unlike Survival Mode where blocks must be constructed from Components, and welded in a time-consuming fashion. In Creative Mode, blocks are placed instantly; fully constructed, players are immune to damage; Hydrogen & Oxygen will not be consumed and are infinite. Batteries will quickly recharge themselves at all times. Objects can also be spawned instantly in such as Asteroids, Blueprints, and other various items. Block placement reach is also extended up to 100m. Additionally, players are also able to construct scenarios while in Creative Mode for other players to play & explore.

To paste the creation back into the world, press the (default) - CTRL+P keys. You can use the block rotation keys to change its orientation, and the (default) - CTRL+MOUSEWHEEL UP/DOWN to increase or decrease the distance from your position. An additional feature of the paste function is that players may snap pasted items of the same grid type (ex:large blocks+large blocks or small blocks+small blocks).

There is also the option to delete a creation, this is done with the (default) - CTRL+X keys. A copy of the deleted object will always be stored on the clipboard, and can be pasted back into the game.

Symmetry Mode or "Mirror Mode" allows the players to place/delete blocks to two or more sides at once. It must first be setup with the (default) - M key, then it can be used with the (default) - N key. Rotation and exact placement of the block(s) is mirrored onto the other sides. This mode can help players save a lot of time if both sides of a ship/station are made to be identical. This function is only available in Creative Mode.

Setting up Symmetry is done with the (default) - M key. Symmetry mode supports both odd and even structures, meaning that its central point does not have to be a single block, it can be two.

In Creative Mode, player(s) can instantly spawn in nearly any object in the game, or from the workshop. This includes, but not limited to - Components, Tools, Materials, Ores, ships, stations, asteroids, and planets.

Players can decrease/increase the range the object they're spawning from them with the Control - (default) CTRL+SCROLLWHEEL UP/DOWN.

Additionally, players can save their blueprints faster in Creative Mode by copying the ship/station into the clip board - (default) CTRL+C, and then going into the blueprint menu (default) - F10, and selecting "Create from clipboard", or "Replace with clipboard" which will replace the selected blueprint.

Asteroids and Planets/Moons can be spawned in Creative Mode by going into the menu - (default) SHIFT+F10. Either pre-built models (ex: asteroids) can be inserted, or randomly generated objects using the procedural system.

Predefined asteroids are pre-built models that players can spawn in the game. They range from mountains on planets, to asteroids in space. They have no random generation.

Procedural objects allow a player to randomly generate an asteroid with a different variation, and ore content each time. The variation can also depend on the size, and seed type the player chooses.

Players are able to spawn their own custom generated Planets & Moons using the procedural generator. It allows a player to randomly generate a planet for example with a different variation to its surface each time it is spawned in with different seeds and size settings.

Items such as Components, Materials, Ores, and Tools can be spawned in via (default) - SHIFT+F10. Their quantity can be adjusted, and then placed. It should be noted that ore quantity of Ore will increase in overall size if the value is increased.