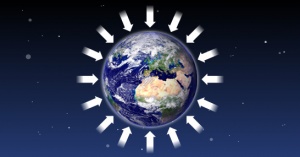 In real life, gravity is an attractive force that matter exercises on matter based upon mass. Gravity in the real world pulls objects together regardless of the distance. However, the strength at which gravity pulls weakens as the distance from the object increases as described with Newton's law of universal gravitation; this strength is inversely proportional to the square of the distance.

Gravity in Space Engineers is limited in range, scales differently and is in other ways simplified. Strong gravity fields may be artificially created without needing a heavy object in their center and their shape is not influenced by the mass distribution.

Natural Gravity is generated by Planets and Moons, they behave similarly to actual gravity and are comparable to the artificial gravity generated by the Spherical Gravity Generator except on a much larger scale. Unlike Artificial Gravity, natural gravity affects all objects - space engineers, items, debris, small ships, large ships, stations, etc. Ships and stations that are not otherwise supported by the planet/moon or held up via thrusters will fall into the planet's surface. Natural Gravity has an adverse effect on the effectiveness of Artificial gravity fields such as Gravity Generators. The strength of Natural gravity at any point is proportional to the distance from the surface of the planet or moon. (Digging very deeply into a planet will actually decrease the gravity.) Natural gravity's strength is not uniform like Artificial gravity, as described in 'Planets'. In addition, Natural Gravity of any kind interferes with the operations of a Jump drive and within the influence of planets or moons, these devices cannot be used until they have left it's influence completely.

Natural Gravity much like all gravity in Space Engineers still do not obey Newtown's third law, meaning that while the planet/moon does attract objects towards it; The planet/moon itself is immobile and will not be affected by gravity at all. Even asteroids placed within the influence of a planet will never fall or otherwise be affected by it. Even other planets and moons placed close enough to each other will be completely unaffected by each other, however due to the combined gravitational effects of both they will exhibit strange gravity i.e. falling up or points where this gravity is cancelled out.

Artificial Gravity in Space Engineers follows almost none of the real-life laws of physics. The force does not scale with mass nor does it increase as you approach the source (it remains the same throughout the whole field). It can even pull itself, which will be explained in depth later. (See Artificial Mass) 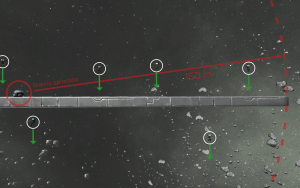 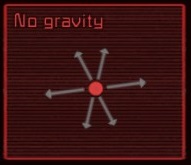 Example of multiple vectors of gravity being cancelled out.

Aside from special blocks, the effects of artificial gravity are limited to engineers and free floating items such as ores and components. Force is applied in a certain direction or vector. A HUD element: Gravity HUD exists specifically to provide real-time information to the player about influence of gravity directly affecting the player, assuming they are not using their jetpack. The unit displayed is not mentionned on the HUD, but is N/kg (Before, it was in 'g', considering 1 'g' = 9.81 N/kg). If multiple sources of gravity exist, then all their vectors will be added to together to calculate a direction. This can even be used to cancel each other out or used to trap objects 0in a 'containment field'. It notably does not affect ships, small or large nor does it affect stations or asteroids. It can be either linear (Gravity Generator) or radial (Spherical Gravity Generator). The effects of multiple generators stack, meaning while the maximum that an individual unit can generate is -1 to 1 g several of them can be overlapped in one space to create a field of very high gravity to a virtually unlimited degree.

The linear Gravity Generator is very different compared to how Gravity in real life would actually work, it produces a uniform field of gravity of the same strength and direction throughout the entire field. It does not necessarily pull objects affected towards it or away from it. Even if the object is underneath the generator it will keep falling with equal acceleration and in the same vector or direction it would have above it, it will stop accelerating under the influence of the generator only when its out of range of its field. This is unlike how gravity works in the real world and unlike how the Spherical Gravity Generator works, which operates much closer to how Gravity would work in reality - in fact you can even place objects into orbit around a spherical gravity generator.

Asteroids are notable for their absolute static nature, they neither possess a gravitational field nor are affected by them (with exception to the ores or debris that are dislodged from them) and they are completely immobile, they cannot be moved in anyway. As are the stations that are physically attached to the asteroid. They essentially have infinite mass as their inertial is impossible to overcome, with either Thrusters or Gravity manipulation.

While it does not usually affect Ships and Stations inherently due to how Space Engineers physics work, special blocks (Artificial Mass) attached to ships can be affected and manipulated by gravity. Thereby providing torque or force to an attached ship, enabling to it 'fall' - technically only the block is falling and dragging the ship with it. Despite ships/stations having a mass, as seen on the Ship's cockpit HUD element - this is not affected by artificial gravity. This mass is also known as the inertial mass, as it only affects the inertial property of ships. That is how much force is needed to move around space, larger/heavier ships take more force to stop and get moving while lighter ships require less force to stop and get moving. Conversely, heavier ships hit far harder than lighter ships - as true in real life physics. However in Space Engineers, unlike real life inertial mass and gravitational mass are two separate things; this seen very clearly with the Artificial Mass that has a true mass of 9 544 kg but this value does not affect the force a gravitational field would have on it. Which is only decided by the gravitational mass of a block which for the Artificial Mass would 50 000 kg therefore, a fullly powered Artificial Gravity Generator operating at 1 g (9.81 m/s-2) would generate a force of: 490 000 N (as derived from Newton's second law) on the Artificial Mass. Thereby accelerating it and pulling/pushing any attached to the artifical ship accordingly or producing torque (spinning around an axis). The special artificial gravity in space engineers produced by the generators are themselves not affected by gravity (their own gravity fields or otherwise) and only have their inertial mass as decided by their mass, compared to the artificial mass's gravitational mass which is affected by fields. Due to this Space Engineers can break Newtown's Third law, as there is no equal and opposite force from the Artificial mass on the Gravity Generator (the generator itself is not being pulled or pushed).

The Spherical Gravity Generator can be placed at the center of an asteroid to simulate effects similar to a planet due to its radial (spherical) pull.

As of update 01.169, the Gravity Generator displays the acceleration in its config.

As of update 01.025 there is an artificial mass (AM) block, which when powered is influenced by gravity. Each Artificial Mass block is influenced independently.

As of update 01.076 there is a new Space Ball block, which is self-powered and has variable settings which include: artificial mass, friction and restitution.