Functional as of Update 01.030, the missile turret is the most powerful weapon which will target and fire upon the nearest hostile block, Decoy, moving object, meteor, or any other specified target within its operational range (adjustable via its control panel), and will always fire on enemy factions' ships and players in range unless programmed otherwise. In Survival Mode it must be loaded with 200mm_Missile_Containers to fire, or if in Creative Mode it has unlimited ammunition.

The turret take the space of a 3x3x3 cube despite its appearance. The turret has its own internal inventory capacity of 6 missiles, but they can also be connected to Conveyor blocks on the bottom to supply 200mm_Missile_Containers from any connected inventory.

The Missile turret's missiles do considerable damage, as well as surrounding area damage around the impact. It is far more powerful compared to the Gatling Turret, but it's ammunition is far more costly to acquire and manufacture. Unlike the Interior Turret or the Gatling Turret, it is best suited for offense than defense; very capable of penetrating and making short work of lightly armored blocks and causing extensive damage to Heavy Armor Blocks. If being used for defense, one may want to have quick access to a means of shutting down the turrets, as they will continue to fire upon disabled ships so as long as any powered blocks remain, such as gyroscopes or reactors, wasting ammo and destroying potential salvage. This can also be dangerous, as while grinding the wreckage, the player may push a powered blocks back into the turrets line of fire, causing it to be shot at, with the player in the line of fire.

The Missile Turret will lead it's targets, meaning it will fire at where the target will be when the missile reaches it, given the targets current movement. The best way to avoid the missiles is to move erratically, as the missiles are not homing, and cannot change course once fired. AI ships, such as Pirate Drones, will not attempt this behavior, and tend to get shot down fairly quickly.

Players are able to take control of any automated turret by sitting at either a Control Station, Flight Seat, Cockpit, Fighter Cockpit. After the player can navigate in the control panel to locate the turret, and click on Manual. This will bring up the 1st-person view of the turret. The player can move and shoot with the turret while in this mode, however unlike the Camera the turret cannot use zoom functionality. 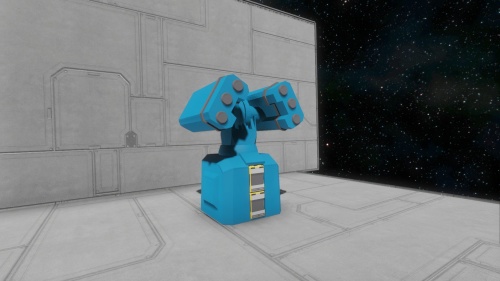