Modding is the process of injecting user-created content into Space Engineers. Currently what is available to be modded is limited, but already clever users have managed to create a wide variety of new content beyond the default vanilla game. With the introduction of the Modding API, a groundwork has been laid to even more customization of the Engineer experience.

There is currently no one-stop shop for all the information on modding. Information can be found here on the official wiki and the official modding section of the forums.

There are many different workflows used by various modders. There is also not a universal workflow that works for everyone. However, the following tools are recommend by most modders and make it much easier to create mods:

Mods can alter the game in a variety of ways.

The ease of mod creation is highly dependent on what skills or ability to learn a modder brings with them.

Mods can be classified by complexity:

Official guides have been written up on the Space Engineers website and the Steam Guides page. These will give new modders a feel for how to set up one's environment and what is required to get a mod going, but a lot of footwork is still needed by prospective modders to discover how all the parts work together. Modders can obtain help or information from the Keen Software House forums, Keen's partnered Discord channel as well as player run groups on other sites.

Every world you generate is saved in its own folder that can be found in C:\Users\{WINDOWS USERNAME}\AppData\Roaming\SpaceEngineers\Saves\{STEAM ID}\

The mod folder has to contain a sub-folder called Data with definition files of added or updated mods. Almost everything can be replaced/updated by the modder (audio, video, textures, models, gui, etc). Mods are restricted to a single world and cannot change anything that exists outside the scope of that world. For example, while you can replace things like GUI Icons for block mods, you can't replace the graphics for the entire UI because it exists outside of a world that would load the mod.

Files with *.fx and *.fxh extension are vertex/pixel shaders for various rendering operations and can be found in steamapps\common\SpaceEngineers\Content\Effects2\.

Every shader file gets recompiled on game launch. If you modify one, restart the game. If the game crashes on launch, it’s probably due to a compilation error caused by your changes.

Some textures are in the DirectX *.dds format (DXT5 compression). You will need an editing program that can manipulate them. If you use Adobe Photoshop, we recommend installing this plugin and using these settings for exporting: 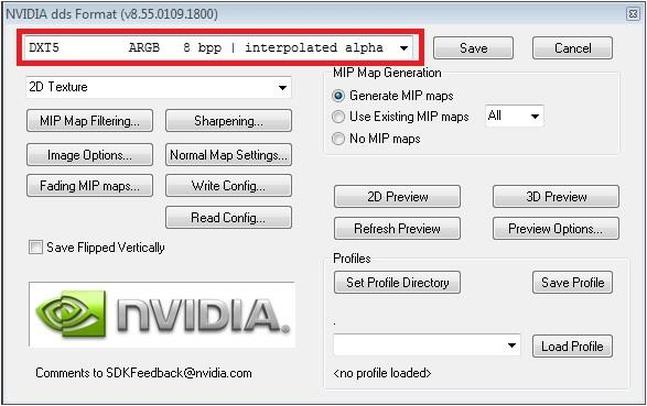 The textures which can use the above method are limited primarily to GUI Graphics such as Block or menu icons.

With Space Engineers moving from DX9 to DX11 PBR textures, the Method for creating textures has changed.

The easiest method is to create PNG or TIFF files for each texture and use the Texture Packing Tool to compile them into a .dds texture. DX11 textures use a different compression type (BC3 to BC7), therefore the plugins for DX9 will not work to open or save textures in this format. The DX11 textures are:

More information can be found here. While this link is for Space Engineer's sister title, Medieval Engineers, the games share a common code base and the modding process is nearly the same for both games.

MwmBuilder is the utility built by the devs for converting fbx files to mwm models.

Note: You may need administrator rights to copy or create files in Program Files folder; you can copy MwmBuilder and dlls into a different folder.

Models are stored in: steamapps\common\SpaceEngineersModSDK\OriginalContent\Models\

Models have been moved to the SpaceEngineers ModSDK. For information on obtaining the SDK on Steam check here

Creating a working script is a difficult process for a single individual to do, and to facilitate easy creation of scripts an API is required to guide a prospective modder in the correct direction. Initially the community did this themselves with the Mod:SEModAPI, but in Update 01.048 Keen released an official API as well. SEModAPI is no longer in development and should no longer be used. This guide and others like it on the official wiki will only discuss how to use the official API.

There are three planned "levels" of script modding for the official API:

The current implementation of the API includes all three methods. Since these mods can be subscribed to and downloaded within Steam's infrastructure, certain limitations are in place to make sure that malicious mods cannot do irreversible damage (such as deleting files on the hard drive, etc). As such, not every in-game or out-of-game function can be used. See the Scripting Whitelist page for more information.

These can bypass all protections in place in the game for preventing malicious code. That is what makes them so powerful as they can use functions normally restricted. They can do things like changing the GUI menus to add custom screens or add custom functions to blocks which are normally hard coded in the game. They are not available as workshop mods and are manually downloaded and loaded in the game with a specially created shortcut to SpaceEngineers.exe. It is advisable to only use plugins from a trusted programmer, or one that has the plugin source publicly viewable. Some plugins also have their own mods that need to be subscribed and added to a world through the Steam Workshop in addition to manually installing the plugin. Because of the potential for plugins to cause damage to not only the game saves, but to an individual PC, they are not officially supported by KSH.