The piston is an extendable block that can move blocks attached to it up or down. It has conveyor support and is able to transfer Oxygen, Hydrogen, Power, and various types of items. You can place items on top of the piston, and it will move up or down whenever it is triggered to do so. All blocks can be placed on the piston such as a Gatling Gun or Blast Door Blocks if you wanted to make your own custom hangar door.

Technically speaking the piston is made up of two grids, much the same way as the Rotor. The base of the piston, and the Piston Head. While there are some limitations, the piston itself has been vastly improved, and is now almost entirely stable as of Update 01.106, even at high speeds.

Piston's settings can be set inside the control panel, which is discussed below.

The piston is capable of extending to a maximum of 10.0m (Large), and 3.0m (Small). The Piston Head sit's a bit higher than the rest of the blocks at about 0.1m. This causes the blocks attached to the top of the piston to be slightly out of alignment compared to the parent ship/grid. Another notable limitation is that not all blocks can move alongside others while being placed ontop, or extended by the piston. This is because the collision boxes hit each other, causing Deformation and damage. Only blocks such as for example Blast Door Blocks can move alongside others without damaging them. 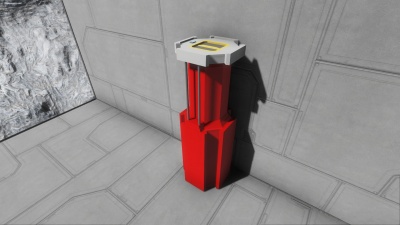