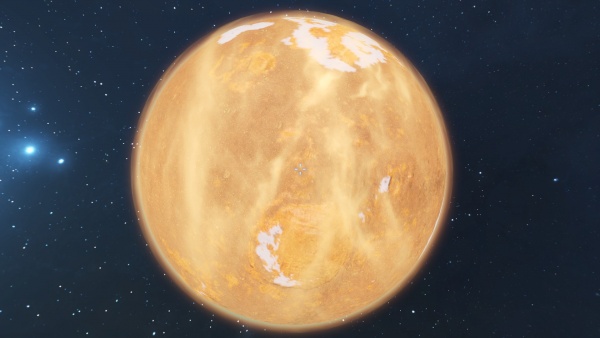 Mars is rocky barren world in Space Engineers. Its default size is 120km, and also by default its accompanied Moon is Europa. It has a thin atmosphere that does not contain any Oxygen, and a gravity field of 0.9G. As with all other Planets in Space Engineers, it is completely destructible and immobile.

The surface of the planet variant Mars is mostly rocky and flat, but does contain extremely large mountains on its surface that reach high up into the atmosphere. The ground has no vegetation to speak of, it only contain sparsely scattered Boulders, and orange, and dark brown patches of Ore veins. Although less commonly available than on Earth, Mars does contain Ice. They can be located on peaks of tall hills & mountains. The larger ice lakes are scattered far apart from each other, but they're several kilometers in size and are very abundant.

The atmosphere of Mars is very thin, and doesn't contain any Oxygen. Its visual is a very dark-gray unsettling look over the barren landscape. It only extends outwards 15km from the surface.

If the weather system is active, Mars is subject to random sand storms at any point.