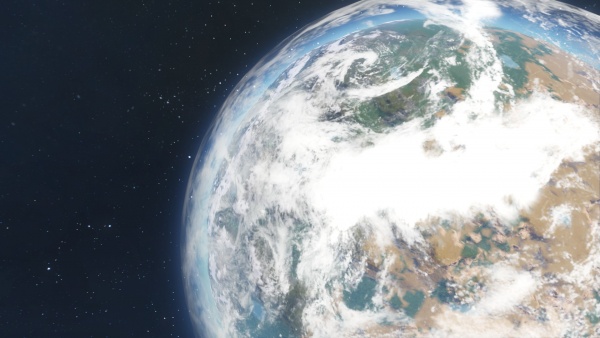 Planets are destructible voxel objects with their own Gravity field, atmosphere, vegetation, and hostile life. They are similar to Asteroids in that they're fully destructible voxels, and have randomly generated Ores but that's where their similarities end. Planets range in size from 19km to 120km in diameter. By default, each planet comes with it's own accompanied Moon, unless manually spawned in by a player. Moons and Planets are exactly the same objects technically and are very similar in practice, with a few key differences being: Moons are much smaller often only 38km in diameter and possess much weaker gravitational fields - down to 0.25 g.

Much like Asteroids they are completely immobile and never will move no matter how much force is applied, and are themselves not in anyway affected by gravity. If two planets were spawned very close to each other inside both of their gravitational fields, niether of them would ever fall into each other and meet. Although objects would experience some very strange gravitational effects from both of them.

While their surface appears randomly generated, they're in fact pre-loaded voxel models. There is no procedural generation with Planets or Moons. When the size of the Planet is increased, it actually stretches the models to accommodate for the new size. The textures and vegetation aren't stretched, only the surface model is. Each planet type Earth, Mars, and Alien will spawn the appropriate models and surface textures associated with them. The same properties are applied even when it is spawned in manually by the player via (default) - SHIFT+F10 in Creative Mode.

(~15 to ~50 Meters): Large horizontal veins of Ores with a thickness of a few meters. Each ore patch usually contains 1-4 ores. Different ores of the same patch can be found in different height levels. The surface above the ore patches is slightly darker and in a brown-ish color, so they can be easily spotted from a higher position. Dense Grass can make spotting harder. All ice lakes on the surface of a planet contain Ice ores, despite looking like flowing water.

The ore is hidden inside stone rocks that are spread randomly over the surface. Boulders are all about the same size, they contain about ~20,000 of rare ores up to ~100,000 of iron ore. Under certain conditions, the positions of non-drilled boulders are reset completely, so GPS-Markers on these rocks become void. The rocks are also voxel entities that are separate from the planets voxels. They do overlap the planet in the way that station blocks do.

Atmospheric Thrusters act almost inversely with Ion Thrusters, while thick atmospheres are disadvantageous to Ion Thrusters - they are advantageous to Atmospheric Thrusters. They operate anywhere 100% at the planet's radius otherwise known as 'the surface' to 0% effectiveness (providing no lift or propulsion) when they leave the atmosphere of the planet. They require an planetary atmosphere to operate, whether breathable or not - pressurized rooms will not do.

Planets generally have 1 g of acceleration (9.81 m/s^2), while Moons have 0.25 g (2.45 m/s^2). They remain constant within a certain range but quickly diminish beyond a certain point, generally it's highest peak at an exponential rate. Once the gravity of the planet or moon (in units of g), reaches 0.05 g anything beyond this range is no longer affected by the planet's gravity and has completely escaped it's gravitational influence. This distance is much shorter than in reality for actual planets, making actual high altitude low-speed orbits impossible - although it is possible to park a station or ship in place at this point to act as if it were in Geosynchronous orbit. The effective range of a planet's gravitational field extends out approximately 71.82% of the radius of the planet, starting out from it's surface and decreasing exponentially after it's 'Hills Parameter attitude'. For example, a planet with a radius of 10km - will have it's gravitational influence extend out to 17.18 km from it's center.[2]

The following formulas describe the gravity of planets/moons:

The pirate bases are not randomly generated, but instead were placed manually into the world. Each Planet has a set number of these bases, and on it's accompanied Moon for the player(s) to add more challenge/difficulty.

Planets are home to NPC's, that will make building or operating on a Planet much more challenging or interesting. Their aggressiveness, spawn timers, and numbers range differ from each other. The engineers location does not matter, they will spawn in any environment on the Planet surface. Listed below are the NPC's in the game:

<Explanation of planets having different types>

There are three types of planets, as follows:

The Earth planet variation represents a scaled down version of the real-life Earth. It has similar plants, and some of the environments. It has a breathable atmosphere, and a default Gravity of 1g.

The Mars planet variation represents a scaled down version of the real-life Mars. It's a barren planet with no vegetation of any kind. It has a default Gravity of 0.9g, but does not have a breathable atmosphere.

The Alien planet variation is a fictional planet with a unique set of properties and strange vegetation. It has a default Gravity of 1.10g, and has a thin breathable atmosphere, but just barely.