The Projector is a block capable of displaying full sized Blueprints in a projected image around it. It is available for both large ships, stations, and small ships. The projection can either be instantly spawned in a Scenario gamemode, or welded together in survival.

Before it can be used the Projector must first be powered, and also the player needs a Blueprint they can use in order for the block to project it and unlock additional options. Once a blueprint has been selected, the list of blocks needed to complete it will be displayed in the Terminal. The model will appear near the block.

In survival, the player must adjust the position of the Blueprint so it is in contact with the projector's Grid. When welding, the projected block in contact with the projector's grid will be welded first provided both of them can be welded together, then others adjacent to it. The same principle applies to the blocks after that until the model is completely built. This method can also be used to repair an already built ship. Simply Blueprint the ship (before it was damaged), then use the projector and line it up with your ship so it overlaps. If there are any damaged, or missing blocks, the projector will display it and allow you to weld that area.

In Scenarios gamemode the <insert block instant option here> allows the projector (when triggered) to instantly spawn the blueprint instead of it being constructed piece by piece. 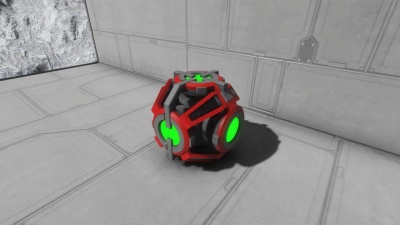