Wheels and suspension blocks allow the player to create ground-based vehicles for exploration, combat, aesthetic purposes, or simply for amusement. The designs of the vehicle is completely up to the player, nor is it limited to being a vehicle. This page is an overview of the wheel and their suspension blocks. This page was written with the help and information based off of user RIPerKilla's[1] Comprehensive Rover and Suspension guide[2] on the KeenSoftwareHouse Forum; several user inputs, and experiments. Please have a look at the very in-depth guide thread on the KSH official forums, located under References.

Wheels in Space Engineers are static rotating blocks that can travel along a surface. They have a slight cushioning effect, meaning they can absorb slight amounts of pressure and impact before they themselves take damage or the surface they are traveling upon. However, without suspension to absorb shock from traveling on uneven surfaces such as terrain on a Planet, the wheels cannot effectively travel on any rough surfaces without receiving damage, or breaking off entirely. The Wheel blocks themselves are not powered in any form, and have no means of propelling itself. The wheel blocks rotate freely, and their properties cannot be changed in any way.

Suspension in Space Engineers are blocks attached to the wheels that allow a vehicle to absorb large amounts of shock and impact from uneven surfaces, and a means to propel itself. Suspension in Space Engineers is a multi-purpose engineering part of the game. Suspension is a simplified and a bit buggy model of the real-life suspension concept. It can be used in different ways and has different applications other than just making ground-based vehicles. Such examples like, large space elevators, bumpers to absorb slight impacts from other vehicles/ships, and much more. Its application use is only limited by the imagination.

The Suspension blocks have many properties in which the player can change to alter their behavior, such as the height off-set of the wheels, the amount of torque, or even how much friction the wheels have. This allows for a wider range of creations, and inventions for players to explore. Most notably Suspension Wheels are used to create ground-based vehicles in which to travel upon the surfaces of Planets and Moons. They are far more efficient than Thrusters in any environment where Natural Gravity is present, since they use far less power, and do not need to actively counter the gravity.

To control Suspension Wheels much like Thrusters, the player must enable "Control Wheels" in the Cockpit of a vehicle. Otherwise the vehicle will not respond to any movement controls.

Power parameter sets the amount of torque (in percent) that your wheels have. Simple as that. Too high power will cause burnouts and too bitter acceleration. Too low - and your rover just be unable to move.

Friction parameter sets the amount of grip (in percent) your tires have with the surfaces it comes into contact with. Too much friction will bring about a lot of problems. Recommended setting for friction <30% for all grids and masses.

Damping parameter sets the amount of "Damping Force". Damping force is the force that, basically, prevents suspension from changing its position. That's all. If there's no damping, suspension will oscillate freely. If there's too much damping, only excessive and continuous force applied to a wheel will be able to move suspension significantly. On flat surface like racing circuit you need more damping - the stiffer suspension is, the better. But on off-road you need just enough damping to prevent oscillating.

Every suspension has a spring. It pushes wheel down, to the limit. But in SE suspension works both ways. So for this explanation, Strength will be named as "Spring Force". Strength parameter sets the amount of the named "Spring Force". As always, in percent.

For example, the wheel will be pushed down to the ground. Then, Spring Force needs to overcome rover's mass to lift it. So ground clearance is dependent only on the amount of Strength the spring has. If Strength is too low, it will be unable to overcome rover's mass and thus lift it above the ground. If force is excessive, wheel will be pressed to its lower position, and there will be no "suspension travel" downwards. The amount of Strength you need - is just as much as enough to lift the car for 2/3 of overall suspension travel. Thus wheel will be able to travel 1/3 down and 2/3 up.

Height Offset is a parameter, which allows SE suspension to work identically in both ways - up and down. And thus making suspension a multi-purpose block. Height Offset is just the point (remember that part), where wheel tends to stay. It DOES NOT set the ground clearance. To set ground clearance you must tune the "Strength" value according to your rover's weight. It's the point to where the wheel is pushed. It can be up, or down, or in the middle, or anywhere. 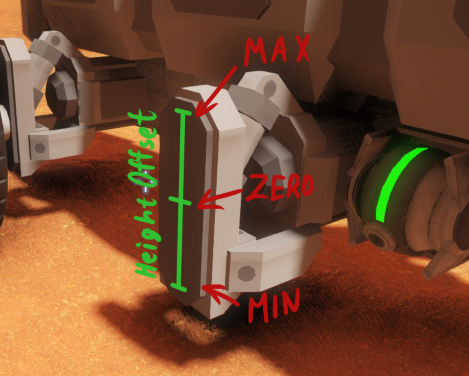 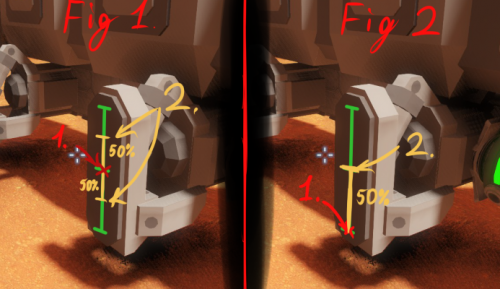 As most of our real world cars steer. Rear wheels locked, front wheels steer. Profits of this steering scheme is that parking and turning maneuvers are more precise and predictable. Also it gives better stability on high speeds.

Some IRL (In Real Life) utility machines do have RWS. As stated for FWS, it's all about precision. With RWS it's much easier to perform, for example, cargo loading operations (forklifts), or any operation happening in front of the vehicle. Though, this scheme is completely incompatible with high speeds - you're gonna roll terribly.

Another IRL steering scheme. It's used on some old Mazdas and also a new racing Porsche (if i'm not mistaken). With this scheme front wheels are steering for the full angle, and rear ones steer for just a little, like 5-10 degrees. In SE such scheme will help to utilize bit higher Friction values without rolling. Makes parking and other precise maneuvers a bit more difficult.

Simple as that. All wheels are steering at full amount. If there are more than 2 axles, than it requires some angle tweaking. I, personally, don't like this scheme much. I use it as option (enabling steering on rear wheels from toolbar) for excessive maneuvers on low speeds. Also can be useful on heavy large grid rovers, cause it sometimes helps to overcome rolling forces. I think it's because high inertia of large grids. On small grid this goes vice versa, increasing possibility of roll.

Obviously from the name, Rover Curiosity[3], rolling now on Mars, uses this scheme. It's an optimal scheme for 6x6 or 10x10 (or other with odd amount of axles, for all those little wheel maniacs) vehicles, where axles are at equal intervals one from each other. It should be used on such vehicles instead of AWS.

Under this scheme, only the front and rearmost axles handle steering and do so equally; any intermediate axles are not used for steering.

This one is also IRL, but used only on 6-8 wheeled vehicles. Seen some 6x6 APC's with such schemes, so there's where the name comes from.

In this scheme, the frontmost axles do most of the steering, but intermediate axles provide lesser steering (as with 4WD), and the rearmost axles provide only traction/power.