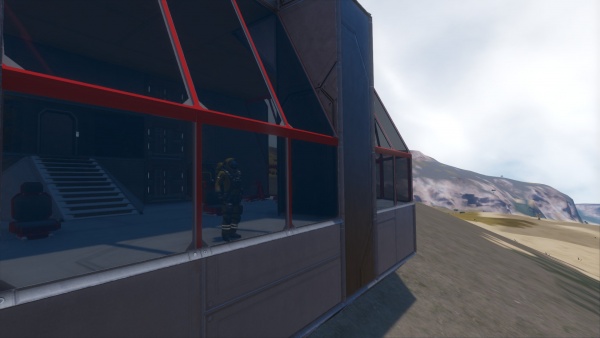 Glass Windows in Space Engineers are transparent blocks that allow players to view and light to pass through. They're quite expensive to build, but only comprised of mainly in large amounts of Bulletproof Glass, and Girders. Transparent windows with glass not only allow the player to see, or allow light in, they also are capable of keeping a room pressurized if the windows are placed properly. However windows are very fragile, and cannot take very much punishment before the block becomes damaged or breaks entirely.

Grate windows are empty blocks with metal plates running across it. Often referred as "vents", they allow sunlight, limited viewing, and even allow gunfire to pass through the empty spaces. Unlike other window blocks, grate windows do not contain any glass, and therefore cannot act as a seal to pressurize rooms. However, if placed in front of an Air Vent, they will allow Oxygen to pass through. They're very inexpensive to build, requiring only iron based Components.