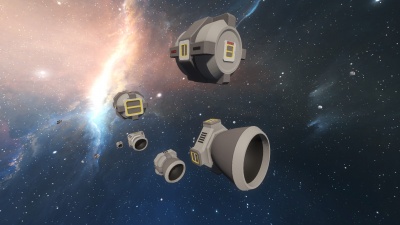 Hydrogen is a fuel used to power Hydrogen Thrusters and the Space Engineers' suit while using their jetpack. Hydrogen is only used with the jetpack and is not used when for example walking or running on a surface with Gravity.

While they are a fuel their applications are limited to only propulsion either via Hydrogen Thruster or the engineers' suit. They cannot be used as an alternate power source for the Reactor or burned for other purposes.

They cannot be used to pressurize a room.

For more information on usage in hydrogen thrusters, see Thruster.

It can be created using the Oxygen Generator, along with Oxygen from Ice. It's more efficient and faster to produce Hydrogen via Large Block Oxygen Generators as opposed to small block ones.

It can be stored in the Hydrogen Tank, Hydrogen Bottles or the Space Engineers' suit. For the purposes of the game units of Hydrogen such as H2 and H are used interchangeably with Liters, even if this doesn't make sense. Therefore 1 H = 1 L of Hydrogen gas.