The Projector Block, introduced in Update 01.058, allows Blueprints to finally be used in Survival Mode. This block allows an image of the blueprinted ship to be projected and thus constructed in place.

The video that the below guide is taken from

A Projector block, in both Creative and Survival modes, can perform as follows

While it's simple enough to set up an ad hoc projector to build a fresh ship from a blueprint, projectors can also be extremely useful to include permanently into a ship or station design, as a reference for repairing damage. The more sophisticated a ship is, or the more likely it is to become damaged, the more beneficial this is. Here's a brief guide to making the most of it.

When designing a ship in Creative Mode, include a projector somewhere that is:

Don't worry about any of the repair projector's settings until the rest of your design is complete; configuring it should be the very last thing you do when you are completely satisfied.

Once you are finished with your ship design and build:

Warning Space Engineers deeply, or more specifically, recursively scans grids when making blueprints. It will also scan the blueprint loaded into a projector, recursively. So if you perform the steps above more than once your blueprint file size is getting larger. Before starting with step 1 above, it's best to clear the blueprints from the projector(s) on the ship. This way you'll only have one series of recursion happening in your blueprint. This will keep the file size optimally small.

To build the ship from scratch (for example, on a planet), start by building a "bootstrap projector" as mentioned earlier. Knowing exactly how to shape this temporary assembly can be tricky, because it depends greatly on the shape of your ship, the location of the repair projector in relation to the rest of the ship (especially power supplies), and the shape of your surroundings. Ultimately, you want to be able to power the bootstrap projector and project the blueprint such that:

Now build the ship against the blueprint as normal, but give preference to whatever parts will allow the ship to power its own repair projector as soon as possible. You'll also want to be sure that the ship will not destroy itself or go spinning out of control without the bootstrap assembly as an anchor, so the ship may need functioning thrusters, gyroscopes, and/or landing gear. As soon as that's the case, grind away all the blocks that were part of the bootstrap assembly, being extra careful not to damage the repair projector. Then proceed with the rest of the construction. When it's complete, switch the repair projector Off. It's wise to check all hotkey assignments in cockpits, flight seats, and so on, to be sure they linked up correctly with the newly-built blocks. Hotkeys that control the repair projector may need to be reassigned (presumably because the repair projector is the ship's only block that was technically built from a separate instance of the blueprint), but if you're lucky all other assignments will be intact.

Enjoy your new ship. When enjoyment inevitably leads to some of it being destroyed, simply switch the repair projector back On. It's already loaded with the correct blueprint and alignment, so any blocks that need rebuilding will magically appear for you to weld back into place. The projector's terminal screen will even helpfully tell you exactly how many blocks are missing.

Upper side (marked with +): 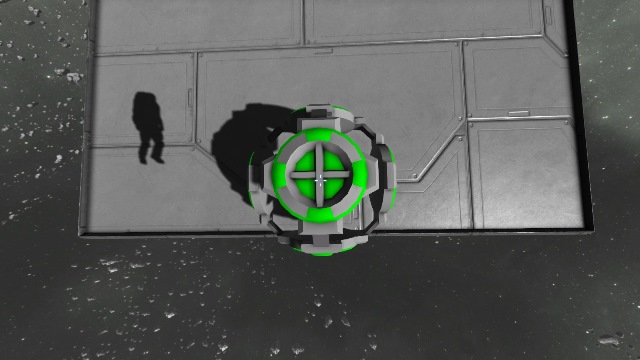 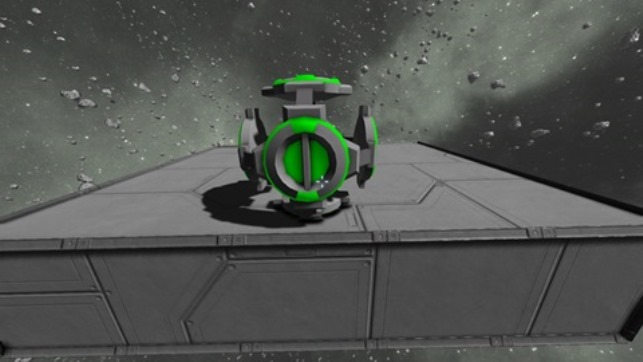