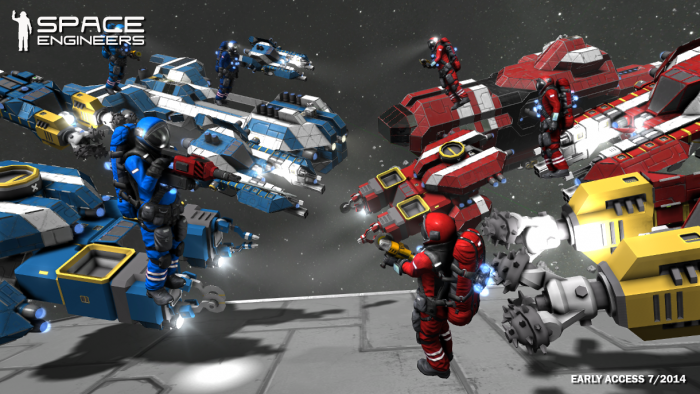 Factions are player created organizations and groups in Space Engineers that players and NPCs can be a part of. Factions can have multiple purposes, including Commerce, Industry, Military/Fighting, Piracy, or simply to group with your friends. Factions were implemented in Update 01.037.012. Even with no faction created, a player is considered to be their own independent faction.

To start your own faction, click Create in the factions tab to start a new faction of your own. A window will pop up asking you for information. You are required to make a tag and a name. If you make a mistake or want to make changes later, you can edit the information in the faction tab after it is created at any time.

If you wish to remove your newly created faction, make sure there are no other members, then simply click the leave button. If no members are present, the faction is automatically destroyed.

Currently, management over the members of your faction is limited to adding, kicking, promoting, demoting, and accepting/declining new member requests.

If someone wishes to join your faction, they must first request permission in the Factions tab under that factions name. Their request will be listed under the members box. You can choose to accept or decline them. You may also select the Accept Everyone check-box to auto-accept all requests.

You can also kick a member if they are causing trouble or you no longer wish for them to be in your faction. This will remove the member from the faction, and their permissions to use faction-shared blocks. You can also choose to leave on your own.

Certain positions carry special privileges. Still, as of Update 01.092, there is limited functionality with rankings. The only function it presents is who takes over ownership of the entire faction (descending order) if the founder leaves/dies permanently. The list below shows available ranks:

In Space Engineers, factions have options to interact with each other. The founder of the faction can choose the option to be At Peace with the other, or Declare War. By default, all factions are considered to be neutral to your own.

A neutral faction is neither hostile or friendly, however, automated defenses & other blocks owned by others will consider them to be potential threats. By default, all players are considered neutral, and new factions. Targets that are neutral will be highlighted as green.

A friendly faction is one that is allied with your own. Automated defenses will not fire upon your allies, however, allied factions will still not be able to gain access to your factions blocks. Targets that are friendly will be highlighted as blue.

Hostile factions are those you consider to be dangerous, and a direct threat to your faction. When declaring war on another faction, all automated defenses will consider them to be threats, and all blocks owned by your faction will restrict access from them. Targets that are hostile will be highlighted as red.

Quick summary of each standing:

All blocks that contain Computer components will have ownership functions and belong to either a player or no one. Ownership restricts access to other players unless permission is given for them through that blocks Control Panel. Such restrictions include viewing the block list, modifying block properties, using actions (such as buttons), and prevent cargo from being extracted. Decoration and armor type blocks have no options for ownership currently and will function normally for anyone.

Ownership can be given to a different player by selecting the block(s) from the Control Panel and changing ownership to them. Only the original owner of the block may change these properties.

In the event that the original owner is no longer present and/or has died from Permanent death, the blocks will still retain their original ownership settings and if the same player comes back to their property, they will be perceived as hostile and the player will be forced to hacking their blocks to regain control.

Hacking is the act of seizing control of an already-built Block. This block may have been built by another player, spawning on an NPC Ship, or built by you yourself before losing ownership (such as after respawning in a respawn ship outside of a Medical Room). Hacking itself is the same regardless of who built it originally. It involves using a Grinder to remove components from a block until all the Computer components have been removed. If everything is then welded back on using a Welder, the computers will be re-configured to recognize the one doing the welding as the owner. The hacking threshold is shown by the blue line on the construction interface; once the blue line has been crossed, the block has been hacked, and welding can begin anew.

There is no need to use new computers. Simply re-weld the ones you gathered from the device. It goes without saying, but devices without computers cannot be hacked (and as a result, those blocks do not deny access based on ownership). To see a complete list of blocks that incorporate computers (and are thus hackable), see the Computer page.

Be warned: when hacking starts the block being hacked will attempt to broadcast a warning to its owner using an Antenna. Be prepared for a vengeful Engineer coming to protect his/her property!